From Ring Bearer to Pall Bearer

Her daughter, Teresa has had the unenviable task of seeing her younger brother, Darrell, her dad and now her mom go on before her. Left with none of her own family to make memories with is indeed a solemn thought. She does, however, have the support of her good husband, Mike, and her sons and their wives and of course her grand daughters. She has the love of a good family she and her husband have created over the years to support her.
As for me, it’s the end of an era where Aunt Marion was the lasts of my dad’s family. My granddad John Colie and grandmother Elsie Grey, son’s James and Daryl, daughters Gerald and Marion are all gone now. More directly, I am the oldest of my dad’s, James, family with himself, Peggy, and all younger than me to include Danny, Mike, Timmy and Jamie. All of my family is gone except Jamie, who lives in Hawaii and is a mere 47 years old. A young man still in my book.
The memory I share here today is of my aunt. I was a young lad with a few memories that still remain. I remember her as being a young woman who was fresh out of high school and still living at home. At some point she went to work at the A&P grocery store in New Bern where she met this gangly tall man few years older, who worked there. He lived in Reelsboro, between New Bern and Bayboro. They hit it off and in my little mind were getting married in short order.
Being about five years old at the time I was ripe for being included in their wedding. I 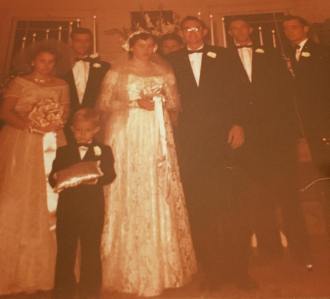 There I am as the ring bearer

was assigned the duties of ring bearer, so I was dressed up, given a pillow with their two rings on it and given the duty to bring them to the alter during the procession to seal their vows with.

I remember that after they married they would always come for Sunday dinner at grandmother’s house. I don’t remember the order of their off-spring, but Teresa and Darrell came along in that order. But there were twins that were born to the Lee family that passed away at birth named Garry and Barry.
I have a vivid memory of something that occurred and I hope it doesn’t upset those of you who read this. Grandmother came home late one evening behind Aunt Marion and Uncle James when Aunt Marion was pregnant with the twins, just behind them into to the yard at grandmother’s house. As they stopped she said she saw the tail lights of the car come on, but the looked like two coffins. It was the omen of the demise of the twins. They both died at full-term birth. I don’t know why, but grandmother’s vision was never forgotten to me.
Teresa was the second of my cousins I remember after Marsha, who is the daughter of the other of my dad’s sisters. Both Aunt Gerald and Aunt Marion had a girl each first and then a boy each that grew up with me and my four brothers. I remember before my granddad died that when Christmas rolled around it got busy in the house on Christmas eve with family and us kids running around. It was finally decided we would draw names for gifting instead of the previous everybody buys everybody something.
Aunt Marion and Uncle James lived in a little box of a house in Reelsboro for a while and we would occasionally visit with them. Uncle James’ mom lived just down the road from them. Their home was approximately across the road from the Reelsboro Christian Church, where a fellow high school graduate of mine, Bob Cayton came to pastor in years following his college graduation.
My problem with family history is my ex-wife kept me busy with her family during our marriage and I lost track of mine to a large degree. It became evident as time went on that she didn’t like my family and they have expressed that to me since the divorce. But that aside I did have the opportunity to visit with my Aunt Marion after they had moved to Morehead City, where Uncle James became the manager of the A&P grocery on Arendall Street. Later when A&P closed up he bought into the IGA franchise and ran it in the same location till the late eighties I understand.
The story goes on that my aunt worked on with the church she helped establish in various positions. My uncle later on went to work in the men’s department at Belks and worked there until shortly before his death in his mid 80’s.
My uncle loved Aunt Marion for 61 years of marriage. He was an astute business man, but still a gentle man to his family and wife. He gave much more than he was required to do. Aunt Marion never lacked.
After my separation and divorce I would visit with her because by that time she was in Crystal Bluff Rehab more than she was at home. She was a determined woman with a sort of chromudgen sort of way in expressing her opinion. She never liked my beard and to be honest it was her last comment to me before I left from visiting her the last time I saw her before her death. Her grandson was sitting in the room at the hospice told me not to worry about that. She didn’t like his either.
In all reality Aunt Marion had a solid faith in God. The last day I saw her before her death I walked into her hospital room and she was sitting up partially in her bed watching a Gaither Family video of gospel music. Teresa said she’d been singing along with them.
I feel certain, and can likely be attested by her family, she was prepared to go home to once again be with the love of her life. It was a bit ironic that she was taken from the hospital to the hospice where she was placed in the same room where Uncle James had passed a year earlier. It was as if it was meant to be. She went on to her Lord there with her family around her, peacefully and quietly.
I’ve led a life of ups and downs, but there have been moments that stick with me as good memories in spite of circumstances. She and Uncle James chose me to be their ring bearer at their wedding. Before her death she made it known to Teresa that she wanted 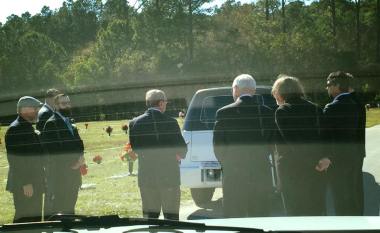 I’m the pall bearer on the left with the hat.

me to be a pall bearer at her funeral. I accepted this request with honor to her.

From ring bearer to pall bearer and all the in between. Many years and many memories were created. Not only in my life, but I’m sure in hers as well. We do carry a connection as blood family, but also in life in it’s whole expanse. I’m honored to have known her and that which she created in life. She was an excellent example of a wife, mother and aunt.

I'm a 71 yr old guy, who had worked in Naval Hospital Camp Lejeune for 28 yrs and now retired as of 31 Dec 16. I've worked in medical records, Health Benefits Department, Billing, the IT department and retired as the Personnel Security Manager for the hospital. I'm a musician and Corvette enthusiast. Yes, I have had two. I traded my second Corvette for a Harley Davidson Fat Boy mid-summer 2019. I've already ridden about seven thousand miles. I'm also searching for a fresh new outlook on life with new spiritual insight among other things. I was ordained a minister on 20190202. I've become certified with the American Chaplaincy Association through Aidan University in June '21. I'm the Director of Emerge Chaplain's Response Team. I've found that with the unconditional love of my companion, Libby Rowe life is complete through God. She's a beautiful, vibrant, giving woman who gives her all in everything she puts her mind to do. She and I married 24 July 2015. She's also taking the Apprentice course to obtain her ordination as well. She finishes up her studies for full ordination in Feb '22. She has a blog too called Under a Carolina Moon. Give it a visit.
View all posts by Jim →
This entry was posted in Ponderings. Bookmark the permalink.