As I continue to watch the unfolding track of Irma, I’m reminded of the path of Fran in 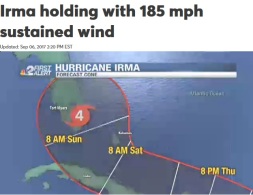 1996. It wasn’t the path of Irma, but it took aim at Wilmington like a cruise ship coming back to port.

What strikes me most is the ever changing path that Irma has taken.  First, the west side of Florida, then the middle and now the east coast of Florida while it skirts up the coast and coming in around Charleston.  What’s to say this curving doesn’t continue until it comes in around the ENC coast.  Other hurricanes have done this, too.  North Carolina sits just too far out from the states south of us.  In fact even too far for the states above us, too.  We’re like a sore thumb for North Carolina.

You know what else I don’t like?  It’s that Onslow County is considered a coastal county as this is true, but I live in the west end of the county just a few minutes from Duplin and Jones County, which neither touch the coast, yet Jones County goes much closer to the coast than I’ll ever be.  So is Craven County.  I’m further inland than these two counties, but they share a cheaper homeowner’s coverage rate than I do, because this county has a coast line.  Personally, I think the industry should draw a line so many miles back from the coast and call everything east of the line the higher cost areas for homeowner’s insurance.  I pay more for mine than someone in Jones and Craven County that lives several miles closer to the coast than I do.

Having survived Bertha and Fran, back to back in 96, was an experience I don’t like the idea of experiencing again.  Bonnie was the nicest, if you can call a hurricane nice, with winds still around 100 mph plus.  We never lost power.  All the others we lost power every time.  Dennis was mischievous.  It came, went and came back after a loop out in the Atlantic.  Floyd was horrible, too.  Last year our Walmart across from us down the street lost all of it’s frozen foods.  I hope they have thought ahead to get generator power at least to it’s frozen food sections.

My former house sat in an open area and almost, or could have lost its roof during Fran.  I had to nail the sheeting back down after daylight came after that horrible night.  A tornado spun up and crossed my backyard and demolished my work shop and destroyed the double-wide next door.   I’ve never experience such a weather event ever in my life.  Perhaps around 1960 or so, give or take, I was too young to realize the devastation of such a thing until the next day, when we got out and surveyed the houses I lived in, the old house we lived in and my grandmother’s house.  We came out okay on our two houses, but my grandmother’s had a huge cedar tree that fell on her bedroom and another fell by the pack house.  One other tree was blown over and everything was a mess.  My two favorite trees survived.  They were the mulberry and pear trees.  It was a good thing my grandmother had stayed overnight with us.

One hurricane that we didn’t suffer a direct hit from was Hugo.  It was also a Cat 5 part the way to the U.S. and came ashore in Charleston at 135 mph.  It went to the western part of our state around Greensboro on its way up north.  It was tough on them to say the least.  Charleston survived, but was extremely damaged and flooded.  I am feeling this may be the landing zone before us for Irma.  Hopefully scrubbing just off the coast, Irma will deteriorate somewhat before making a solid landfall.

Jose?  Not sure about that hurricane yet.  I see from reports that it is expected to be a much smaller one with winds in the 90 mph range.  Still enough to do inexorable damage.

Hang on folks.  2017 looks to be a history setting year for hurricanes, seeing that Harvey has already made a mess out of Texas.

I'm a 71 yr old guy, who had worked in Naval Hospital Camp Lejeune for 28 yrs and now retired as of 31 Dec 16. I've worked in medical records, Health Benefits Department, Billing, the IT department and retired as the Personnel Security Manager for the hospital. I'm a musician and Corvette enthusiast. Yes, I have had two. I traded my second Corvette for a Harley Davidson Fat Boy mid-summer 2019. I've already ridden about seven thousand miles. I'm also searching for a fresh new outlook on life with new spiritual insight among other things. I was ordained a minister on 20190202. I've become certified with the American Chaplaincy Association through Aidan University in June '21. I'm the Director of Emerge Chaplain's Response Team. I've found that with the unconditional love of my companion, Libby Rowe life is complete through God. She's a beautiful, vibrant, giving woman who gives her all in everything she puts her mind to do. She and I married 24 July 2015. She's also taking the Apprentice course to obtain her ordination as well. She finishes up her studies for full ordination in Feb '22. She has a blog too called Under a Carolina Moon. Give it a visit.
View all posts by Jim →
This entry was posted in Memories, Ponderings, Sobering Thoughts, Weather. Bookmark the permalink.