I’ve been out in the garage more today than usual.  I’d committed myself to helping mow the church lawn on Friday’s, but I also do volunteer work for Emerge Ministries by repairing donated bikes for the homeless or poor for kids to have something to give them joy.  I also have a few that adults may even use for their git-around (sic). 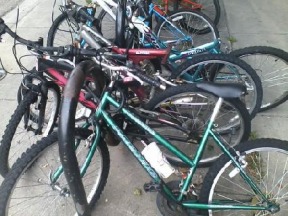 and two 16″ bicycles ready for someone to give them some degree of fun or ability to travel.

I don’t feel anything I have to say is profound.  Just a simple thought.  What do we do to improve life for someone else?

You will find that life will have its rewards for you in the principle of sowing and reaping.  The more you give of yourself the more you will find coming back to you.  It doesn’t have to be monetary.  Satisfaction of accomplishment for one’s self has given me the impetus to move forward even further.  Impetus.  Now that’s a big word.  It simply means stimulation or encouragement resulting in increased activity.  The key to this comes from increased activity as it says.

Increased activity.  Now at my age that hardly seems something that I wasn’t looking for when I retired, but I find it necessary.  Not for the sake of just simply doing something, but to help others.

Driving a bus, for one thing, was not on my radar a little over a year ago.  My wife and I had completed the ETTP class for substitute teaching and received our certificates.  Then came a call to come to the class to obtain my CDL-B for driving a bus.  I’m open enough to accept it and went.  On the day of our exam for the learner’s permit to drive I also had an interview for substitute teacher.  I went dressed very business like after I completed the exam for the permit.  I got the permit and a rejection letter from the sub-teaching position.

Later on I went to the class for the road work for the CDL-B and passed.  After pulling together all the paperwork, physical and drug testing I was in possession of a CDL-B and a job.  You see, J.T. Cardwell once told me in my early years of being a Christian to go for the open door.  If it closes, it wasn’t meant to be, but if it r

emained open, walk through it.  The day I walked into the Richlands District Transportation office I was put on a bus with a woman who was leaving in a few days.  She drove that morning.  I drove that afternoon and next morning and then she cut me loose and I drove from Thanksgiving until the end of the school year on the two routes she left me with.

I’ll admit I was not a big fan of anyone of school age.  But there I was with a group of elementary and middle school kids.  The first couple of months they tried me and I was sure I would have a heart attack.

But something clicked the third month and I found myself liking what I was doing and God gave me a plan of discipline that is a bit different than the ones I watched other drivers employ.  I talked to my kids.  Got to know them.  Perhaps other drivers did or do the same, but I was a stranger to this realm.  Now I see why God closed the door to the sub-teaching position.  I needed this instead.  The change in me reflected in several of the kids as some told me I was the best bus driver they’d ever had.  One went so far as to tell me I was like a dad to him.  My response was that I was perhaps more like a grand dad, but he said no, a dad.

I still have this on me as I drove some for the Summer Reading program where I had one little girl tell me yesterday I was the best bus driver she’d ever had.  It was the last day before a short break until I have to be available next month for the start of the new school year.  What I have learned is these children and young people received from me.  I gave them from my spirit.  Doing this will give them more life than any cut and dry discipline.  Imparting life to another will spark life in them.  In turn it will come back to me as life.

I'm a 71 yr old guy, who had worked in Naval Hospital Camp Lejeune for 28 yrs and now retired as of 31 Dec 16. I've worked in medical records, Health Benefits Department, Billing, the IT department and retired as the Personnel Security Manager for the hospital. I'm a musician and Corvette enthusiast. Yes, I have had two. I traded my second Corvette for a Harley Davidson Fat Boy mid-summer 2019. I've already ridden about seven thousand miles. I'm also searching for a fresh new outlook on life with new spiritual insight among other things. I was ordained a minister on 20190202. I've become certified with the American Chaplaincy Association through Aidan University in June '21. I'm the Director of Emerge Chaplain's Response Team. I've found that with the unconditional love of my companion, Libby Rowe life is complete through God. She's a beautiful, vibrant, giving woman who gives her all in everything she puts her mind to do. She and I married on 24 July 2015. She was ordained in February 2022. She has a blog too called Under a Carolina Moon. Give it a visit.
View all posts by Jim →
This entry was posted in Abundant life, Children, Christian, church, Ponderings, Possibilities, Spiritual, Spiritual Investment, Spiritual Investments. Bookmark the permalink.