Where I Ought to Be

I sit here listening to Enya. It’s Celtic music. Very soothing, settling the spirit and soul. My mind goes so many different directions all the 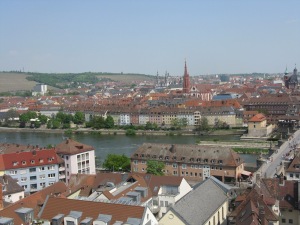 time I find it good to bring my mind to a singular state for a moment.

It brings to mind the feeling I had when I lived in Germany, even though this music is not a German style. What this music does for me is makes me remember the lifestyle of the German people. Americans are way too driven going from one thing to another and another lacking satisfaction in the moment on their way to another lacking of satisfaction. Americans don’t savor the moment. Europeans seem to be as one who would stop in the moment, close their eyes, tilt their head back slightly and smell the air. They tend to not be hurried in life. Work is a necessity of life, but life itself is what is to be enjoyed. Not how to get that next advancement in a job.

I visited many places while I was there. Not with the typical GI’s or where they hung out to get drunk and cause trouble. I had three friends who were interested in the culture in as many aspects as we could muster during our tour there.

We would take a train to somewhere at least once a month and go somewhere. Ed Weeks was my roommate. He came from West Haven, Connecticut. He, Pops, Hochesang and I would hop a train and go to Nuremburg or Frankfurt mostly. Pops and Hochesang were both from Minnesota. Both of these cities were large and full of culture and history. One time we went on a tour of the Danube River, stopping off for lunch at a monastery. That was my first experience with black beer. It appeared to be coke with a head on it by looking at it. We took a train ride to Köln one weekend. We visited churches there for the most part. I’ve never seen so many gold clad icons in all my life.

Back to the Danube trip for a second. While on this tour we were also treated to a tour of a church that has a gold clad dome. My awe was the lower levels of this church, though. In those lower levels were torture chambers for trying people for supposed crimes. I could see why one would “confess” to crimes. There were the judgment seats behind wood slats turn on an angle so as to not be seen. Iron maidens, racks that a body could be stretched to separating bone from bone at the least. There were many more devices to extract confessions besides these two.

I also got an assignment for a long weekend when I first got to Germany as a chaperone for a large group of American High School students. The mission was to help keep them together during a trip to Paris, France. They were a great group of kids, but still I was only 20 myself. There was a lot of temptation, but surprisingly kept myself in order and enjoyed a great tour of the sites there.

But, I get away from my point of thought. That being the feeling where one can stop and gather thoughts. I found some of those thoughts to be much bigger than myself. I would, at times, get a vision of who I was and where my place was in all the earth. I found where I fit in. It was refreshing to know I fit in somewhere in the scheme of life. I felt as though I belonged where I was at the moment. I felt like I belonged in Germany so much so, to the point I felt I had lived there before. I felt at home there. I have no hesitation to answer the question of would I live there. My answer is yes. For the rest of my life on earth is my answer.

Of course I feel like Aurora, NC is home, but only to the extent in this life I know I grew up here, but I felt more at home in Germany. I could feel the history of the people who lived before now. That land has been the scene of peace, but still the foundation of two world wars. Many died on the lands covering from the ocean to the Russian borders. But still the people now seem more peaceable than here in America. Oh, it’s not to say there isn’t any unrest there. I did encounter a large protest one weekend when in Frankfurt, but my friends and I turned down a side street and avoided it. They were marching directly toward us. But overall I reiterate, Germans are a more friendly people than some credit them to be.

I’ve talked to Libby about it many times and she’s all for us going there as a Civil Service employee for a couple of years or so, but she doesn’t want to go there to live. She wants to be close enough to visit with her children. I can understand that. Still I told her we could come home occasionally. At the very least I want to visit there one more time for a couple of weeks.

I so want to recapture the feelings I’ve lost so many years ago. Perhaps I’m not meant to, but I teasingly glimpse them on occasion, so I know they are still there just out of my grasp. Still I reach out for them.

I'm a 69 yr old guy, who had worked in Naval Hospital Camp Lejeune for 28 yrs and now retired as of 31 Dec 16. I've worked in medical records, Health Benefits Department, Billing, the IT department and retired as the Personnel Security Manager for the hospital. I'm a musician and Corvette enthusiast. Yes, I've have had two. I traded my second Corvette for a Harley Davidson Fat Boy mid-summer 2019. I've already ridden about three thousand miles. I'm also searching for a fresh new outlook on life with new spiritual insight among other things. I was ordained a minister on 20190202. I've found that with the unconditional love of my companion, Libby Rowe life is complete through God. She's a beautiful, vibrant, giving woman who gives her all in everything she puts her mind to do. She and I married 24 July 2015. She's also taking the Apprentice course to obtain her ordination as well. She finished her first year of study and has been ordained as an Exhorter. She has a blog to called Under a Carolina Moon. Give it a visit.
View all posts by Jim →
This entry was posted in Ponderings. Bookmark the permalink.